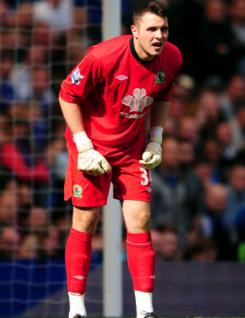 Jake Kean is a tall young goalkeeper who is on the books of Blackburn Rovers. Jake signed for Derby County on leaving school, but towards the end of his second year with the club he had a trial with Rovers, joining them shortly afterwards. After developing in the academy and reserve teams at Ewood Park, Jake joined Hartlepool United on loan in September 2010 as cover for Scott Flinders. Thrust into first-team football when Flinders was injured, Jake enjoyed a lengthy run in the side, producing some fine performances for one so young. On his return to Blackburn he featured for Rovers? reserves in the Premier Reserve League play-off final against Chelsea. Jake joined Rochdale on loan for the 2011-12 season. He has been capped for England at U20 level.