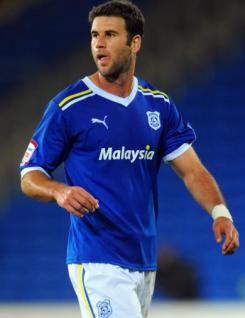 Dekel Keinan is an experienced defender who signed for Cardiff City in the January 2011 transfer window. He made his debut in the local derby win over Swansea City shortly afterwards and then featured regularly in the line-up alongside Mark Hudson in the centre of the defence. Dekel spent his formative years in Israel with the Maccabi Haifa club, signing for Premier League new boys Blackpool in August 2010. However, he found it hard to win a place in the Seasiders? line-up and quickly moved on to Cardiff. Dekel is a full international for Israel.