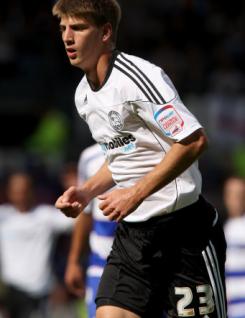 Conor Doyle is a teenaged attacking midfielder who signed for Derby County in August 2010 following a trial with the club during pre-season. Conor was previously playing college soccer in the USA and also appeared for the Dallas Texans youth team. He was included on the bench on the opening day of 2010-11 and went on to make his senior debut when he came on as a substitute in the Carling Cup tie at Crewe. Conor made a number of further appearances for the Rams during the season and also gained international experience. He appeared for the USA U20 team in December and the following month was included in the Republic of Ireland U21s for a friendly against Cyprus before again appearing for the USA in the CONCACAF U20 championships.