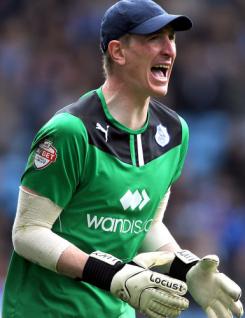 Chris Kirkland is an experienced goalkeeper who initially joined Wigan Athletic in a long-term loan arrangement in the summer of 2006 with the move becoming permanent in October of the same year. He began 2010-11 as first-choice ?keeper for Wigan but lost his place after the opening two games. Chris made just two further appearances during the campaign. He was loaned to Leicester City in November but his stay with the Foxes was cut short by injury and he returned to Wigan after just three games. Chris is a solid shot stopper with tremendous agility who began his senior career with Coventry before earning a move to Liverpool. He never really established himself at Anfield, and after a season on loan to West Bromwich Albion he signed for the Latics. His one full cap for England came in August 2006.