A young Chelsea side were arguably the better team in the first half at Old Trafford, only for defensive mistakes and naivety to be badly exposed.

There have been concerns of a repeat against a rampant Liverpool side who put four past a naïve Norwich last Friday, but Lampard has faith that Chelsea will win if they play at their best.

“In terms of the defeat, I think you always learn as a manager along with your players. We played very well for 60 minutes but if you make defensive errors against good teams then it will cost you,” the 41-year-old is quoted said, via ChelseaFC.com.

“We have to be adaptable and accept the strengths of our opponent so there may be subtle changes in our approach but one thing that won’t change is our intensity to win the ball back.

“I’m optimistic because I believe in the players,” he added. “We’re here in the final because we deserve to be due to the achievements of the players and the club last season. “We understand the quality of an opponent like Liverpool because they deservingly won the Champions League this year. They have a good manager and players so it will be a test but I know if we play at our best then we can win the match.”

Chelsea last won the UEFA Super Cup in 1998, beating Real Madrid in Monaco. They have since lost against Atletico Madrid and Bayern Munich in 2012 and 2013 respectively. And while it is considered a trophy worth winning, Lampard also insists it is crucial for his team’s confidence.

“This final means a lot to the club; it’s another trophy and I know how much it means having lost two finals. It would be nice for me personally to start with a trophy but more importantly it would show to the players that they are capable of competing against a team like Liverpool,” he said. 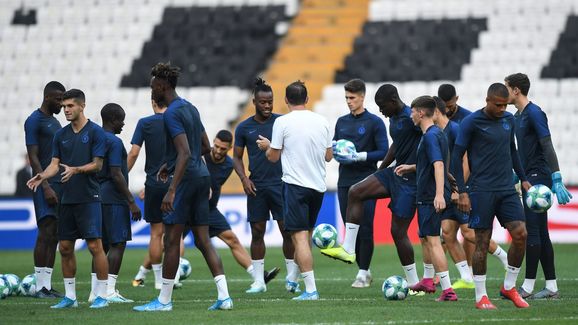 Sadly for Chelsea, N'Golo Kante, who was only fit enough to appear as a substitute at Old Trafford, has ​picked up another minor injury that will set him back again.