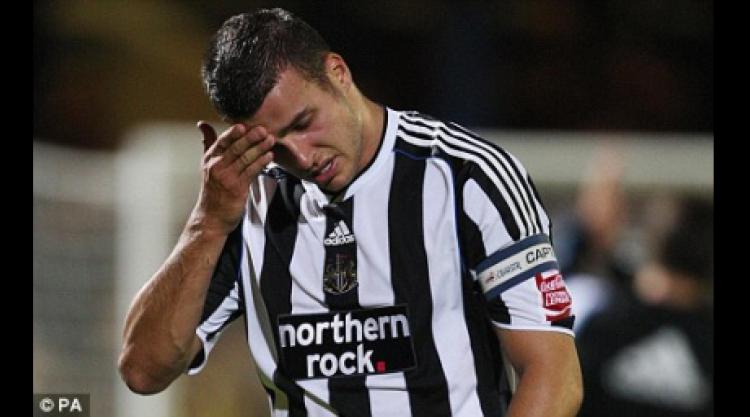 Newcastle boss Chris Hughton has not given up hope of defender Steven Taylor starting the new season despite his shoulder injury.

The 24-year-old will miss Saturday's friendly at Norwich with the problem he picked up at Carlisle last weekend as medics continue to assess the extent of the problem.

However, Hughton is keeping his fingers crossed that Taylor could be available for the big kick-off.

Anxious wait: Steven Taylor suffered an injury in a pre-season friendly against Carlisle and could miss the start of the new campaign

'Hopefully it is not too long out for Steven, but we want to assess it properly first and then clarify the situation,' he told The Journal.

'He will definitely be out of the Norwich game and it could be a few more weeks after that, but we are still assessing it and we are hoping to have more information by the end of the week.

'It's normal that people will be worried as he has had an injury there before, but we don't want to pre-empt anything by speculating how long he will be out for.

'Steven is desperate to play games because it was a really difficult time for him at the end of last season.

'I think he just wants to play games again, so we have all got our fingers crossed for him.'

Taylor missed four months of the 2005-06 season with a dislocated shoulder, and he will be hoping the prognosis is good after sitting out much of the last campaign with a knee problem.

Meanwhile, Hughton has played down speculation linking the Magpies with summer moves for Spanish legend Raul and Marseille midfielder Hatem Ben Arfa, and admitted there has been no progress with Sol Campbell.

He said: 'Raul would have to take a huge pay cut to come here - I don't think he's going to do that.

'I read about Ben Arfa. He is a cracking player and it's nice to see us linked with him, but there has been absolutely no contact there whatsoever.'