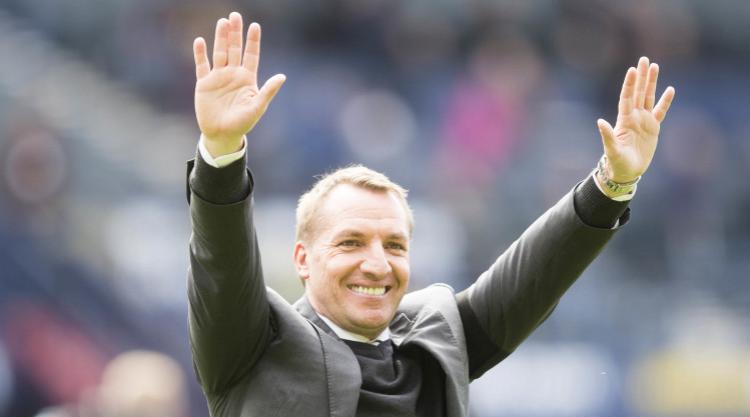 Brendan Rodgers revealed assistant referee Frank Connor came looking for him to apologise for the penalty Hibernian were awarded in the Hoops' 4-2 Betfred Cup semi-final win on Saturday.

The holders were cruising at Hampden Park through a Mikael Lustig double when referee Kevin Clancy, following a word with Connor, pointed to the spot after Dedryck Boyata had nicked the ball away from Martin Boyle inside the box.

Anthony Stokes gave the Easter Road side a lifeline by scoring the penalty but the champions came back with a Moussa Dembele double to set up a final meeting next month with Motherwell, who beat Rangers 2-0 in a bruising encounter on Sunday.

Asked about the officiating over the weekend, Rodgers said: "Over the two games I would be disappointed.

"The only thing I would say is the young linesman came in after the game and apologised so that takes courage to do that.

"He was looking for me but I was at my press conference so I didn't get the chance to speak to him but he came in to apologise and said to Dedryck Boyata that he made a mistake.

"That takes a lot for someone to do that.

"Thankfully it didn't cost us but he made a mistake and owned up to it and t hankfully we had a great reaction and saw the game out."

Steven McLean was in charge at Hampden Park on Sunday where Gers defender Fabio Cardoso was left with a broken nose after clashing with Ryan Bowman.

Rodgers recalled the Motherwell striker's challenge on left-back Kieran Tierney at Celtic Park last season which only brought a booking as he called for officials to keep aggressive play in check.

Ahead of the trip to Aberdeen in the Ladbrokes Premiership on Wednesday night, the Northern Irishman said: "I thought there were a couple of decisions that would have worried me.

"I thought the authority from the officials was poor.

"I could see why Pedro (Caixinha, Gers boss) was probably annoyed because there were a couple of incidents there that went unpunished.

"You maybe would have got away with it in the 80s but certainly not now. It certainly shouldn't have been the case.

"I have seen the player involved in the incidents, in similar incidents.

"I saw an incident with Kieran Tierney at Parkhead last season that went unpunished.

"We all want our team to be aggressive and committed but there is a line and that is up to the officials to see that and act accordingly.

"You want a physical game but you also want officials to stamp out anything that goes beyond that and I felt yesterday lacked authority in terms of officiating.

"You have to make it as uncomfortable as you can for the opponent but if it goes beyond that and it becomes reckless and you are endangering an opponent then you have to look at it for sure.

"The final will be two contrasting styles, that's for sure. Stephen Robinson has got them very committed and very together.

"It is clear how they play, it is very straightforward.

"Get it up to the front two and work hard in behind it. It will be a tough game for us."

Rodgers confirmed that central defender Jozo Simunovic will be out until after the international break with a hamstring complaint while winger Jonny Hayes returns after an abductor problem.