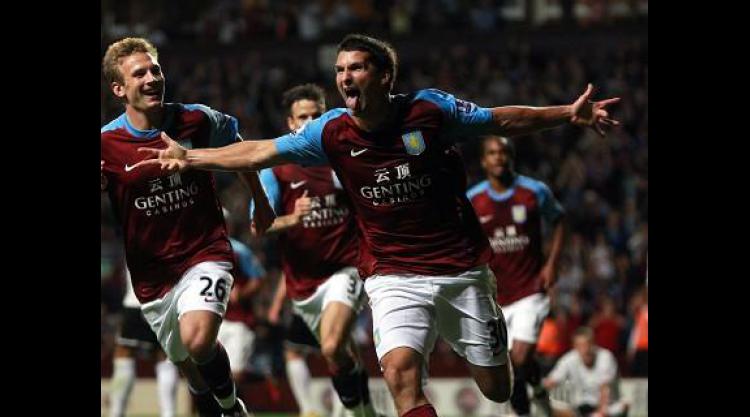 Aston Villa struggled for 80 minutes in the Carling Cup clash against Hereford but Eric Lichaj eventually turned in a scrappy goal and Nathan Delfouneso added a second two minutes from time to make sure as they recorded a 2-0 second-round victory.

West Brom had an easier time in dispatching Bournemouth 4-1 at Dean Court. Jerome Thomas scored an early goal for the Baggies and Marc-Antoine Fortune had doubled the advantage by half-time.

Steve Lovell turned in Scott Malone's cross to get Bournemouth back in it early in the second half, but Simon Cox soon replied for West Brom and Fortune's 78th-minute strike settled it.

Wolves cruised to a 4-0 win over Northampton with Nenad Milijas and Sam Vokes adding to a brace from Sylvan Ebanks-Blake, while Sven-Goran Eriksson's Leicester had to come from behind to see off Bury 4-2 at Gigg Lane.

Jeffery Schlupp's superb opener put the Foxes in front before Bury stunned the visitors as Andrai Jones and Ryan Lowe scored either side of half-time to turn it around, but Paul Gallagher levelled it with a free-kick before Lloyd Dyer put Leicester in front and Neil Danns made sure late on.

Ramon Nunez scored a brace as Leeds beat Yorkshire rivals Doncaster 2-1 at the Keepmoat Stadium. Nunez's first came after half an hour to cancel out James Hayter's early opener.

Nottingham Forest cruised to a 4-1 win at Wycombe on the back of goals in the first six minutes from Ishmael Miller and Lewis McGugan. Robbie Findley and Radoslaw Majewski also scored either side of an Elliott Benyon penalty for the hosts.