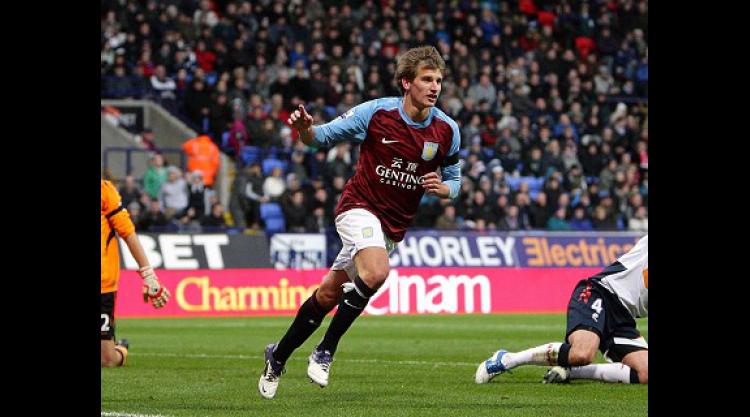 Reds cruise to away day win.

Bellamy and Skrtel struck inside the first 15 minutes to seal the Reds' fifth away win in the Barclays Premier League this season.

But the star of the show was striker Luis Suarez who tormented the Villa defence and hit the bar and the post.

Former Villa winger Stewart Downing was booed by the home fans after his #20million summer move but he and Craig Bellamy caused problems down both flanks.

Villa missed the forward duo of suspended Gabriel Agbonlahor and injured Darren Bent and seldom looked like breaching what is the tightest defence in the Premier League with just 13 goals conceded.

But they were also guilty of frequently giving the ball away and only skipper Stiliyan Petrov had composure in midfield.

Villa started promisingly and Petrov curled a free-kick past the defensive wall and forced Pepe Reina to save away to his right.

Downing managed Liverpool's first effort on goal following a cross-field ball from Bellamy when he forced Brad Guzan to save at the foot of the post.

Then after 11 minutes Downing played a part in Bellamy giving Liverpool the lead.

His corner found Suarez inside the box and a back heel forced a fine instinctive save out of Guzan but Bellamy reacted first to the rebound for a simple tap-in.

After 15 minutes Liverpool doubled their lead through Skrtel - and from another corner.

Villa failed to pick up the central defender as he attacked a Bellamy cross and his glancing header flew past Guzan.

Villa tried to counter-attack and Nathan Delfouneso had a 20-yard shot deflected wide and a long-range attempt from N'Zogbia was just off-target.

Delfouneso teed up the over-lapping N'Zogbia whose shot contained plenty of power but flew into the side-netting.

Charlie Adam was booked after 28 minutes for bringing down Emile Heskey.

Two minutes later Bellamy was yellow-carded for fouling Alan Hutton to the right of the Liverpool box.

But Delfouneso could not keep his header down from Albrighton's free-kick.

Villa were trying to get a foothold in the game but Liverpool continued to look more dangerous and Richard Dunne blocked a first-time attempt from Shelvey after he ran on to Suarez's pass.

Liverpool began the second half on the offensive and twice went close to adding to their lead.

Bellamy's pace took him clear of the Villa defence down the left flank and his cross was headed wide by Daniel Agger.

Then Suarez showed sublime skill in evading the challenges of Dunne and James Collins and from 10 yards out he crashed his shot against the bar.

Villa were giving the ball away too easily and a mistake by Stephen Warnock allowed Johnson time to line up a shot which was turned aside by Guzan.

Reina was forced into a rare save in getting his body behind a low effort from N'Zogbia.

But Suarez was denied by the woodwork again after chipping Guzan following a pinpoint 40 yard ball from Downing.

Guzan turned aside Shelvey's cross-shot and Adam had shot deflected wide when Shelvey was unmarked 10 yards out to his left.

Dalglish brought on Andy Carroll after 74 minutes for Suarez who was given a standing ovation by the Liverpool fans.

Villa substitute Barry Bannan appealed in vain for handball when his shot struck Agger and flew out for a corner.


Aston Villa 0-2 Liverpool: Match Report - view commentary, squad, and statictics of the game as it happened.