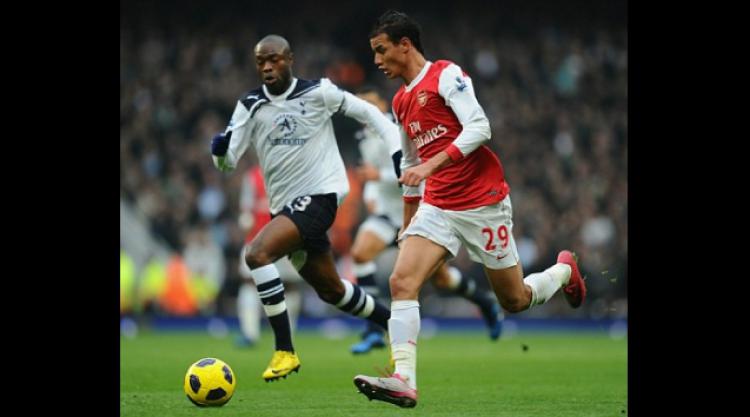 Marouane Chamakh has urged Arsenal to quickly forget the bitter disappointment of defeat against arch-rivals Tottenham by beating Braga to secure a place in the knockout stages of the Champions League.

The Gunners threw away a 2-0 half-time lead during Saturday's north London derby at Emirates Stadium, where victory would have sent them top of the Premier League.

Manager Arsene Wenger lamented the inability of his young side to deliver a big performance when it mattered most as they suffered a second successive home defeat.

On the run: Marouane Chamakh in action for Arsenal against Spurs on Saturday

Chamakh - who took his tally to nine goals with a close-range effort - feels having a match so quickly is the perfect opportunity to put that disappointment behind them.

'It will help us to forget the Tottenham game and we must focus on Braga and get a victory,' the Moroccan said.

Arsenal remain top of Group H, despite losing their last European fixture away to Shakhtar Donetsk - another match in which they were well in control.

Braga were thrashed 6-0 at Emirates Stadium on Matchday 1 during September, but could put themselves right back in contention for qualification to the last 16 with victory over the Gunners.

What's going on? The north London derby proved to be painful viewing for Arsene Wenger

Chamakh knows there can be no complacency against the Champions League new boys.

'The group is tight,' he said. 'There are three teams going for top spot so we know we need to get a win over there.'

Wenger had lambasted his side for being complacent when leading against Shakhtar through Theo Walcott's early breakaway goal, and it was a trait which appeared to have resurfaced against Spurs.

The Arsenal manager will leave his squad fully aware of the need to maintain 100 per cent focus in Portugal.

'It is very important that we do not repeat the performance in Donetsk,' he said.

'We need to produce a performance that allows us to get the points to qualify, but I also want to win the game as that gives us the possibility to finish the group stages very strongly, that is our target - we are ambitious to win the group.'

Midfielder Jack Wilshere should be involved having been left on the bench against Spurs following the back problem which kept him out of England duty.

Denmark striker Nicklas Bendtner was again conspicuous by his absence from the match-day squad, having publicly questioned Wenger's selection policy, but is likely to be in the group which heads off from Luton later this afternoon.

Veteran goalkeeper Manuel Almunia may also be ready for a recall, having been sidelined since the end of September with an elbow injury.

Martin Keown: Arsenal paid the price for second half defensive lapsesAs Tottenham win derby, have Arsenal really got what it takes to win title?ARSENAL FC